I use diamond plates for hand-sharpening (with window cleaner as lubricant).  Specifically, I use DMT Dia-Sharp continuous diamond plates and I currently own four: coarse (320 grit), fine (600 grit), extra fine (1200 grit) and extra extra fine (8000 grit).  I am truly happy with only the coarse and fine. 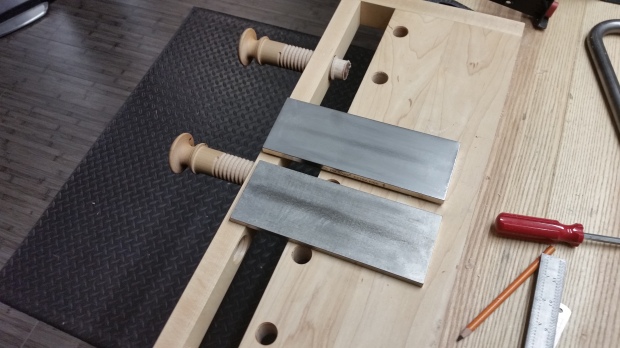 DMT: if you are listening, I am not particularly happy with these two diamond plates.

So I am trying something new.  Rather than purchase replacements (new territory for me, I know), I have decided that from now on, my plane irons are only getting sharpened to 600 grit (i.e., on the fine plate).  After re-watching Paul Sellers’ Sharpening to 250 Grit video a couple times over the last few days, I think it will be okay (I sharpen pretty often as is).  I’ll still do my chisels and router plane irons to 1200 grit on the extra fine plate (since I can run them up and down the remaining grit on the sides).

I don’t really even use the 8000 grit plate anymore.  Given how proactive I am with re-sharpening, I haven’t found the extra effort makes much of a difference on edge retention.  And I think I remember hearing somewhere that the edge dulls to a lower grit pretty quickly anyway, so what’s the point?

We’ll see how it goes.  If nothing else, it will cut the weight of my tool chest by a diamond plate’s worth of ounces.