Fair warning: this post is actually a “how to” on a method for reinforcing a joint where you’re joining two boards at a right angle by screwing through the face grain of one board into the end-grain of the mating board.  If that interests you, please proceed.

I recently built a “The Naked Woodworker” workbench, partly for the intellectual exercise of it and partly because my brother needed a workbench for his recently-expanded garage.  I have mostly good things to say about the design and the ease of construction.  I was able to put the entire bench together in less than 12 hours time of shop time stretched over two days (one long, one short).  Had I let the wood acclimate a bit more before construction, I bet could have done the whole thing in a single day.

This was about 6 total shop hours in.

The bench is mostly glued and screwed together, but there are two joints where boards are joined at right angles with just screws through the face grain of one board into the end grain of the mating board.  One such place is the top rails of the leg assemblies (seen above).  The other is the number of bearers stretched between the aprons to which the top is eventually screwed down.

Screws into end grain, especially late growth softwood, is not the strongest joint.  In an abundance of caution, I sized all the end grain and glued it as best I could.  But it was still a bit shaky in places.  So when using up the last bits of construction lumber to make a shop fixture, there were a couple of places where screws into end-grain just wouldn’t cut it.  Instead, I utilized a 3/4″ oak dowel like a bench bolt to give something for the screw to bite into. 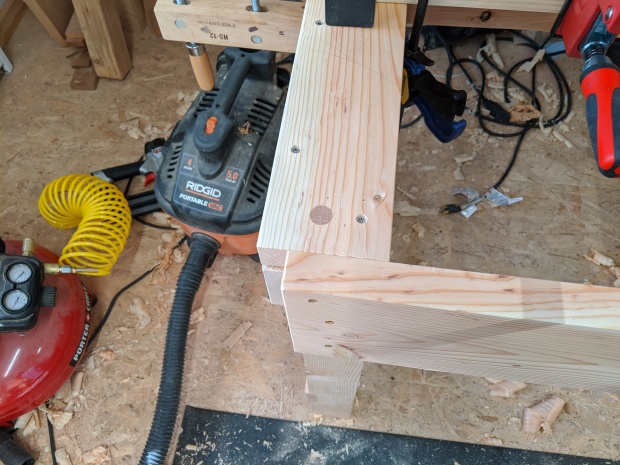 I’ve been using my 18 gauge brad nailer more, these days.

Please note, I cannot take credit for this technique.  I learned it from a Popular Woodworking video on making a quick and dirty first workbench.  It shows up in the first half of the linked video.

First, bore a hole to match the dowel (3/4″ in this case) and glue it in place with the rings perpendicular to the direction the screw will penetrate.  While not critical, this will reduce the likelihood of the dowel splitting and weakening the joint.  Anything over 1″ is probably enough.  I went the full 1.5″ that my drill guide could handle.

The boards cupped a bit after planing.  More stable stock would not have needed this screw.

Next, drill a pilot hole for the screw, all the way through the dowel.  For cleanliness, I first countersank the hole, then finished it off with a long drill bit.  Red oak is tough, even for self-drilling deck screws.  Better not to risk it.  An extra long bit lets you sight to ensure the pilot hole passes through the dowel.

Luckily, this extra long bit (the only one I own) was perfect for the screws in use.

Finally, drive the screw and flush up the dowel.  I use a flush trim saw and either a chisel or a plane, depending on how much material remains after sawing.

Never to be seen again once the top is attached.

If done right, this joint is tremendously strong (at least compared to screwing into end grain alone).  Bench bolts are not terribly expensive, but oak dowel and screws are undoubtedly cheaper.  And, to be fair, this method requires less prep and fuss.

And less prep and fuss is what shop fixtures are all about.