I’ve been cutting some very English-style dovetails (i.e., thin pins) lately.  So for a new scrap bin project (i.e., a mid-century modern side table), I decided to mix it up a bit.  This project goes in a decidedly-Eastern European direction, with pins and tails of even size (other than the half pins, which are about 1/2 the pin/tail size at the base.

I left a little extra width on the mahogany and will plane it down later.

Eastern White Pine and Mahogany are interesting woods when intertwined with dovetails.  One is very soft, the other is just hard enough to take advantage of it.  Hard enough, as well, to let me correct a mistake.  I got my wires crossed when marking the waste on one pin board and my first couple saw strokes were on the wrong side of the line.  I caught myself in time for it not to be fatal, but it would not have been so if I hadn’t gotten into a recent habit.

For most of my time cutting dovetails over these last five+ years, I’ve set the base line at pretty much exactly the thickness of the mating board.  This shortens cleanup time on the finished piece, allowing me to sometimes take a single pass with a smoothing plane on the finished box.  But ever since the carcase glue-up on my English floor chest, though, I’ve changed my technique and intentionally set the baseline with an extra 1/8″ or so.

For whatever reason, my baselines on that English floor chest were too shallow by about 1/16″ all around.  This meant a significant amount of actual stock removal on the assembled carcase just to bring everything flush.  It was no fun whatsoever.  So as a happy byproduct of my new practice, the kerf shown above is not deep enough to show after the pins are flushed.  Or at least it won’t show once the tail board is dressed on both sides before glue-up. 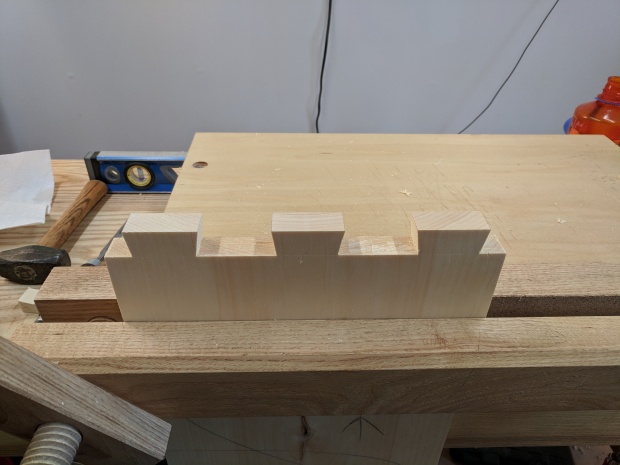 Here’s a better look at those beefy tail recesses.

I made a slight miscalculation on the design of this piece.  There will be two grooves cut in the pine pieces to accept a single sliding door (half width).  But pine is far too soft for the groove to hold up over time, so I need some way to reinforce it.  Perhaps I can inlay some mahogany and then cut the groove in that.