My weekend was somewhat productive.

On Saturday, I set up the temporary workshop at my parents’ house.  I even solved the biggest problem with my old workbench: stability.  I did so in two ways.  First, I screwed the top down to the frame with some 3″ No. 12 screws (no longer just relying just on the friction-fit 3/4″ stub tenons for lateral support).  Second, I loaded up the underside of the frame with additional ballast in the form of five-to-six foot lengths of lumber.  The net result is a workbench that now weighs about 300 lbs (better known as approximately what a workbench should weigh).

On Sunday, I got right to ripping down almost all of the Douglas Fir 2×10’s that will become the new workbench.  Approximately 60 feet of 2×10’s became the following:

The final 82″ of 2×10 (seen below the bench) is the prettiest lumber of all (even with a knot or two) and will become the faces of the front legs and the benchtop.  Some of the off-cuts from the 82″ lengths will also go to the strips of the benchtop that form the mortises (more on that below). 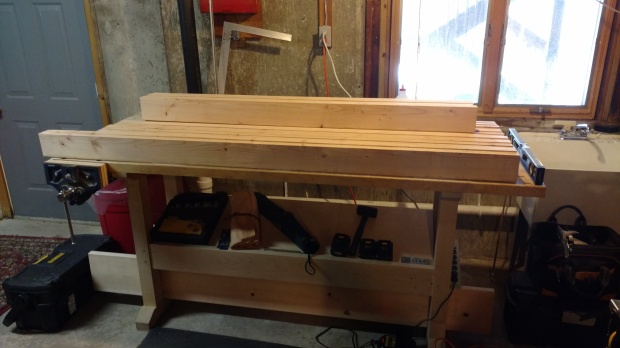 To be left out, for a week, to further acclimate.

More than anything, this post has helped me think through exactly how to use the available materials in the most efficient way practicable. I may need one or two more boards, but for about $100, I will have most of a proper workbench.