It only took me a week to ruin my new workbench.  I’m trying to put on a brave face, but it’s no use.   I can’t even look myself in the mirror, I’m so ashamed.  I drilled the first holdfast hole in the bench, and it’s not plumb.  And it’s the hole farthest to the left.  The one for mortising over the leg.  I’ve got woe.

It’s entirely my fault, too.  Instead of reading the directions for my Crucible Holdfast, I chucked the recommended 1″ WoodOwl augur bit in a modern, three-jawed hand brace.  I was blown away by how easily the WoodOwl powered through the wood.  So much that I lost focus and canted the hole back to front.  I’d be lying if I said it wasn’t over 2° off plumb back to front (although negligibly canted left to right).

The directions recommend a corded drill and jig to keep the bit plumb.  Corded (I think) because (in my experience) the wobble of a brace and bit always results in an overlarge hole as it reams itself with every sweep of the brace.  Jig because it’s difficult to keep a bit that large from going out of plumb, no matter how little wobble you impart.  I utilized neither. 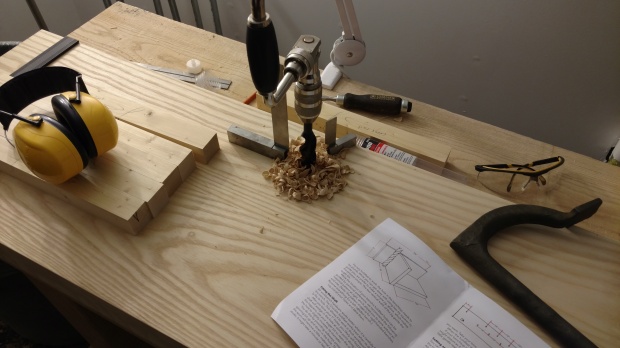 I took a vanity picture during the process and can see the cant in the shot.

The result: the holdfast only holds in a 60° sweep pointed at the front edge of the bench.  It won’t grab at all when oriented lengthwise, either left or right.  It could be worse, but it still makes me sad.

I’m debating plugging the hole with epoxy and a 1″ oak dowel (plus an ash dutchman on the show face).  But that feels like a temper tantrum.  I should probably sleep on it another day.