So it’s still a global pandemic, and I’m running out of lumber for projects.  I used up the last of my 1×12 eastern white pine for a sweet wall-leaning bookcase, which is really just for displaying my vintage Lego sets.  This was only supposed to be the prototype, but it came out so nice, I’m leaving it at that.  More on that soon. 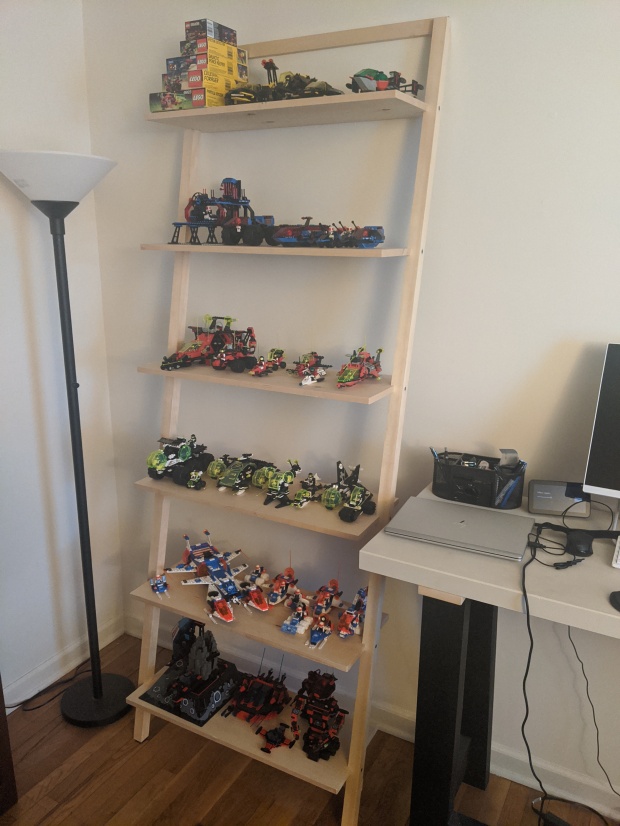 I also finished my new workbench, which is roughly in the Nicholson style.  Made of hard maple (other than  little bit of soft maple blocking under the holdfast holes), it’s 98″ long, 22″ deep and 34.75″ high.  It’s the longest workbench I’ve ever worked on, and, to be fair, it’s probably bigger than I need it to be.  Honestly, it’s probably too big for the 12.5′ x 13.5″ bedroom that I use as my shop.  I’m not banging the walls with a jointer plane or anything, but it’s definitely tight clearance on the ends.

It has no rear apron, like a true Nicholson.

I’ve also been practicing staked furniture (mostly low benches).  I think I’ve found a layout that I like, both structurally and aesthetically.  65 degree sight line and 10 degree resultant angle.  It keeps the round mortises near the outside of the top but is still fairly stable.  There is always one wonky leg, but what can you do?

At least, this time, it’s too little splay and not too much.

So all this is a way of saying I’ve been keeping busy as best I can.  But I need a challenge.  And I need to get back to my apartment woodworker roots.  I’ve gotten too cozy with my proper workbench and full tool chest.

So I’m hitting the reset button.  I’ve got seven Douglas Fir 2×4’s and only these tools:

Although, in fairness, I might use my No. 4 smoothing plane.

Let’s see what we can make!