Using a router and a straightedge clamp to square the ends of the core slab went better than anticipated.  With some fussing, the straight bit worked like a charm, giving me a crisp step down to run the bearing on the pattern bit against.  There wasn’t even any chipping on either first pass with the straight bit. 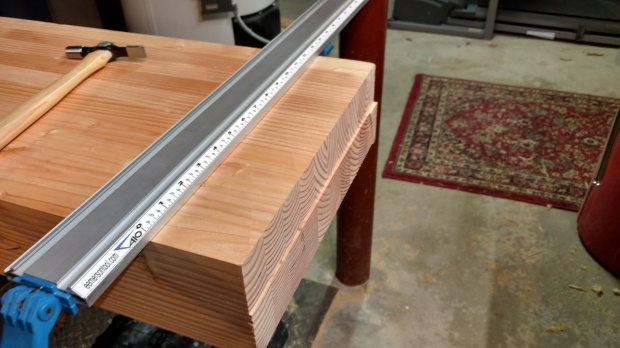 Quite a bit of fussing, actually.

Unfortunately, the pattern bit didn’t work as well and I did get some blowout on the second passes.  Nothing terrible, but I was kicking myself for not first scribing the ends (to sever the fibers and prevent chipping).  No harm, no foul, though, because I still had to plane the front face square to the underside.  All in all, I’m very pleased with the final length of 71 7/8″, which will be further augmented by the inner and outer jaws of a quick release tail vise.

The core slab, now S3S with only the top to go, is approximately 4 1/16″ thick.  Assuming the slab doesn’t move any further (it cupped very slightly in the week after initial thicknessing), I doubt it will take more than 1/16″ to flatten the top.  At any rate, anything over 3 1/4″ validates my choice to use 2×10’s instead of straight 2×4’s.

I’ve already created the mortises on the back edge, and I’ll be creating the front mortises over the Eastern weekend.