Things went better than expected with the laminated feet for the prototype Japanese-style sawhorse prototype. 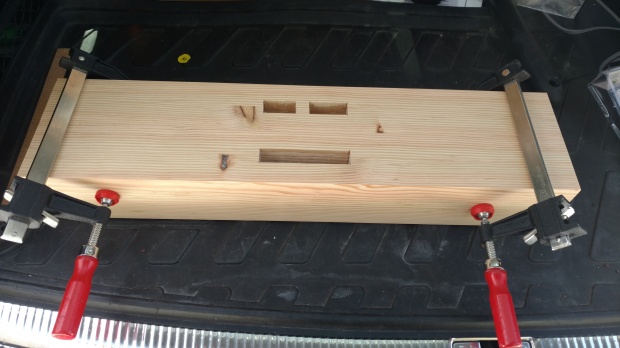 About as well as could be hoped, judging by the facial expression.

Before I hit the thickness planer this weekend, I did in fact cut the dadoes that will end up being the mortise in each laminated foot.  When cutting wide dadoes, I like to leave a bridge section in the middle on which to register the sole of the router plane.  I don’t know why, but this time before thicknessing I left the bridges in one foot and removed the bridges in the other.  There was no difference in the thicknessing result, FYI.

In any event, the bridge is easily chiseled away after the majority of the dado is proper depth.

I also tried something new, which I will call “gang-thicknessing”.  Having taken the time to square up each edge to the reference face, I clamped the foot assembly together before sending it through the thicknesser.  It goes without saying that you should ensure the metal clamps are clear of both the cutter head and the sides of the machine before doing this.  But if done right, it will ensure assembled foot is parallel (and each foot is exactly the same height). 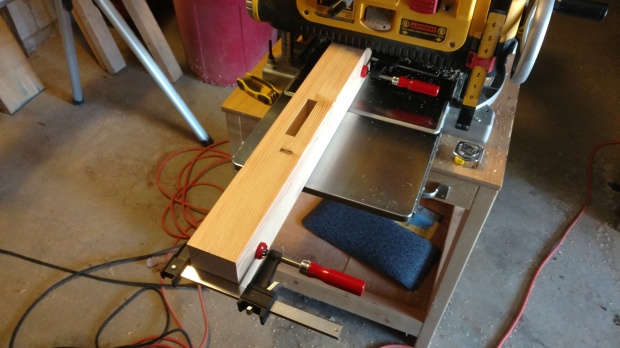 Again: CLAMPS CLEAR OF THE CUTTER HEAD AND THE SIDES!

The sides and top of each foot still need dressing to remove any plane tracks, but I am very pleased with how it all came together.  I have also dimensioned the rest of the prototype parts (legs, stretcher, top rail) and hope to finish the joinery in the next couple days.  Meanwhile, the feet are glued up and drying.

Other than the knots, it kind of looks like LVL, doesn’t it?