I’ve been a bit under the weather, so not much has gotten done in the workshop.  That’s not all bad, though.  It gave a Douglas Fir post, which I bought to be the top rails on the Japanese-style Saw Horses, more time to acclimate.  A good thing, too: it was sopping wet when purchased, as though left out in the rain for a day or two before the pallet was brought to the rack.

Over the last couple of weeks of drying, the two 36″ lengths that will become the top rails stayed quite straight.  There was barely any twist either.  What did happen, though, was some severe checking on the ends and on one face.  It makes me think the wood was greener than it should have been (or was left out in the rain for a very long time). 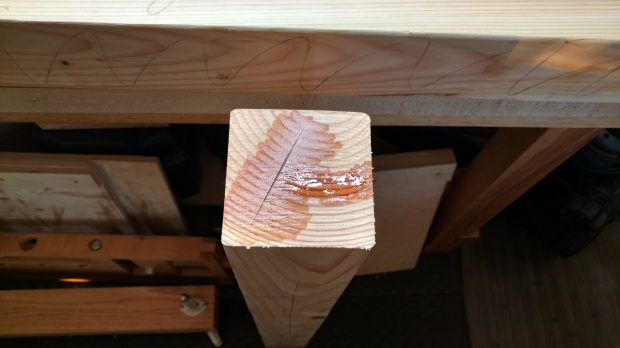 This is what happens when wood dries too fast.

None of the checks were structural, nor very deep.  Not even the long check down the face grain seen in the above picture.  That does not mean, however, that they shouldn’t be stabilized.  There will after all be mortises within a couple inches of each end.

My strong preference for stabilizing end grain checking (and knots, for that matter) has always been thin viscosity cyanoacrylate glue.  Like the Ents at Isengard, I just keep pouring CA glue into the checks until the gaps are filled and the bubbling stops.  Then I give it about five minutes to set before I seal it up with spray activator. 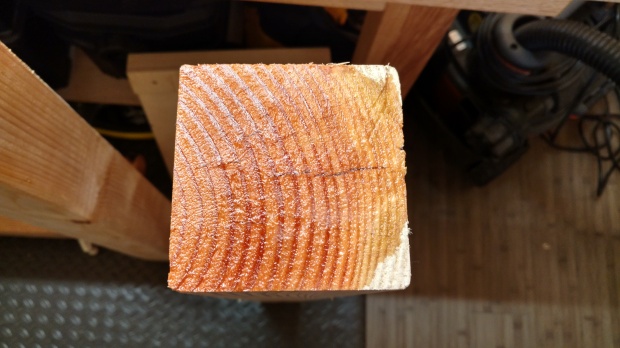 It looks gross, but it works.

I will let those sit for a day or two to fully harden inside, then I’ll square up the ends with a chop saw.  The end result should be pristine end grain and clean glue lines in the stabilized checks.