I have poured my heart and soul into many woodworking projects.  The rolling cart for my new Craftsman tool chest is not one of those projects.  It’s a utility piece and there is no mistaking it.  That having been said, there are a few things about the project that I really like.

I even get to use my large tenon saw. 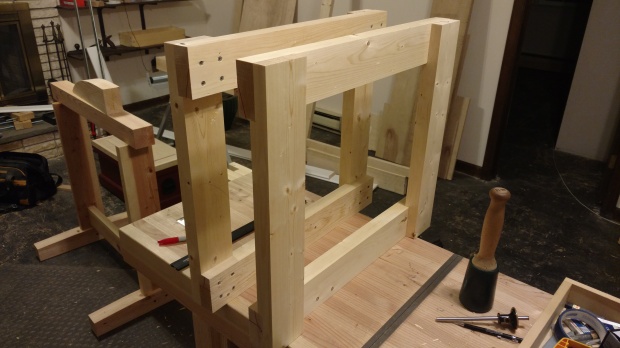 The screws just hold the joint together until the glue dries.

It makes me wonder: would a whitewood workbench be tough enough?  It would certainly go together with hand tools much easier than the equivalent of Douglas Fir, I’d think.  For a light duty bench, say a 10 foot planing bench, I bet whitewood works just fine.

One last thing on whitewood: I’ve noticed is that the grain direction doesn’t quite work the same as other woods.  These boards often have the pith running straight through the middle.  This means the grain runs in the same direction on both faces.  I always manually check the grain first, because flipping end over end (like you’d do with other boards) could be a quick way to some nasty tear out.

Next up is cutting 3/4″ recesses for the long rails, then more gluing and screwing.