It’s come to my attention that I’ve been misquoting Nietzsche for some time (even though I can spell his name first try, every time).  From “Beyond Good and Evil”, Aphorism 146 states:

He who fights with monsters should look to it that he himself does not become a monster. And if you gaze long into an abyss, the abyss also gazes into you.

This well-known quote from the oft-misunderstood German philosopher is undoubtedly the genesis of the Harvey Dent quote in “The Dark Knight (2008)”:

You either die a hero, or you live long enough to see yourself become the villain.

But, because I, like The Batman, am not a hero, let’s allow the abyss gaze into me for a moment. 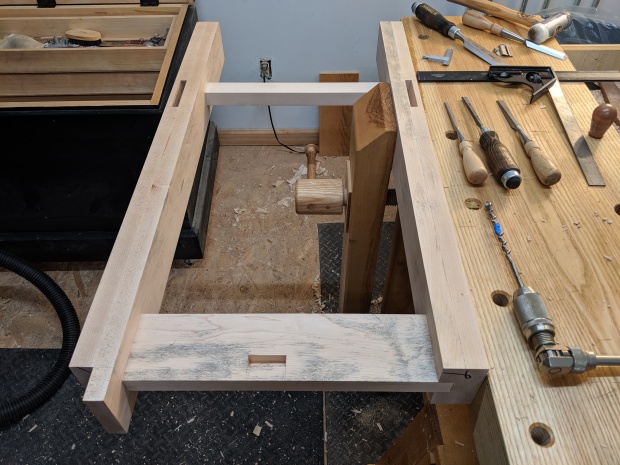 So many mortises, I feel like I haven’t cut a dovetail in forever.

Last week and over the weekend, I did in fact dig deep and bear down.  I chopped four new mortises in the leg frames for the reclaimed console table and planed and joined the two long rails.  After all was said and done, there were 20 drawbores in the undercarriage, plus another 4 in the joints between the front legs and the main slab.  And then I painted the entire undercarriage with “Linen” milk paint.

Not to be confused with “Antique White” or “Seagull”.

But even the best laid plans don’t work out perfectly, so there was plenty of time for things to go pear shaped.  But I was pleasantly surprised when everything came together pretty much straight and square. 24 drawbores, not a single snapped dowel.  Not even a stripped screw on the tabletop connectors.

The picture below doesn’t do it justice, but the piece feels light and graceful.  And in the mid-afternoon light of a north facing window, it evokes the “Islands of New England” feel I was hoping for.  I’m building a shallow tray out of 3/4″ poplar to fill out the rest of the table top, which will be painted in “Coastal Blue” milk paint and nailed on.  The face edge and ends of the main slab will also be painted that color.  The only bare wood will be the top and back edge of the main slab. 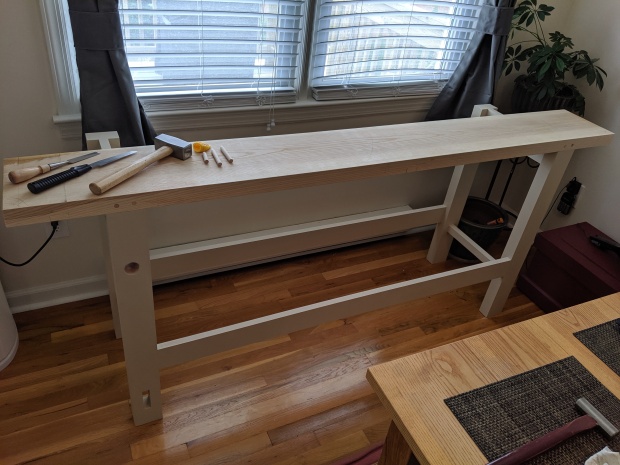 A shelf, if added, will also be painted “Coastal Blue”.

You may recall that I had a tripartite plan:

As someone once said, two out of three ain’t bad.  And that’s one more batch of reclaimed lumber off the pile. We’ll see if I ever get to that leg vise and/or fixed deadman.

Unrelated, I also ended up putting an end cap on the pine bench top extension to the Stent Panel workbench.  I think it looks a ton better, even if it’s not functionally necessary.  It’s not a great color match at this point, but there are worse things in life. 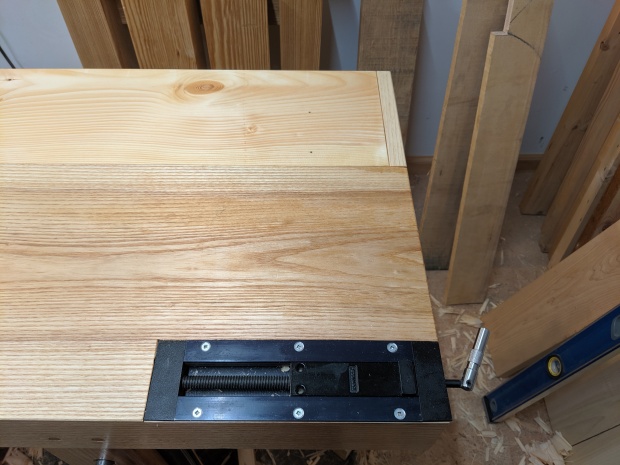 I can finally sleep at night!

Now, if I could just figure out how to do the same thing on the left side of the bench.